Doeden Finishes….. at Kyocera’s Best Technician in the Nation Contest 2021 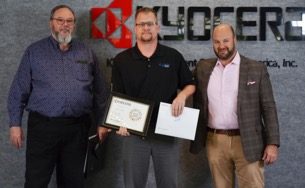 The final step to being crowned Kyocera’s Best Technician in the Nation was held in Dallas on November 12. There were five winners from each region of the country competing to see who would come out on top as the best.

Century is proud to announce that Craig Doeden came in second place as Kyocera’s Best Technician in Nation Contest 2021. The contest started in September as technicians all over the country started the grueling process to make it to the regionals in their area. Doeden along with three other team members from Century Business Products competed in Chicago in October for a chance to compete at the national level. This year’s winner came from the north east region of the country.

Doeden said, “This was the tightest competition since the inception in 2009, there was only twenty points separating first place to fifth place.” The competition included taking tests, problem solving on three intentionally bugged copiers along with questioning from Kyocera’s top engineers in the country, all while being timed. This would have been Doeden’s third win with the others coming in 2009 & 2015 and this would have been the fifth time a Century team member would have won with wins in 2009, 2012, 2015 and 2018. No other technician or Kyocera dealer has ever won this contest more than once.

Once again Century is proud to be serving its customers with not only the best technicians in the country but, we feel the best overall team members in the country. This is a testament to Century’s vision statement, “to be the best business partner through the technologies we provide and the employees that represent us.” For more information call us at 800-529-1950 or send us a note through our Contact Us page.